It has begun! Participants of CODE RED action have penetrated in all parts of the coal stations in the port of Amsterdam. Follow here the live blog of the day of action for regular updates and new photos. On this website, you can access the liveblogs of Thursday and Friday as well. 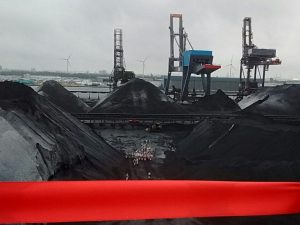 Here we go! This is the blog where you’ll find reguylar updates during the day. Here you can find the blogs of Friday and Thursday.
For all other updates, check:

All large media houses reported on CODE ROOD. The six o’clock NOS-journaal showed gorgeous images from the action. Articles about us can be found on the websites of NRC, Het Financieele Dagblad, Trouw, Het Parool, AT5, The Post Online, HP/DeTijd and on nu.nl. Ealier, Radio 1 announced the action.
A beautiful clip with footage of the action day has been made:

Time for a personal story. Wolfmann is one of the hundreds of participants that is taking part of a civil disobedience action for the first time. “It feels incredibly powerful and at the same time very vulnerable” he says. “You go with nothing other than your body to try and blockade the fossil fuel industry, that makes you feel vulnerable. At the same time you are with all these people and so you feel very strong together.”
The sit-in blockade is going very well, says Wolfmann. “Now we need to ensure that we are well coordinated. We are going to  be here for awhile longer.” 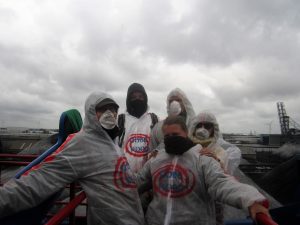 The ‘Mango’ affinity group groet vanaf de toren.
2:00 PM:
The support demonstration just started. We’re happy with the support and hope they have a good time! 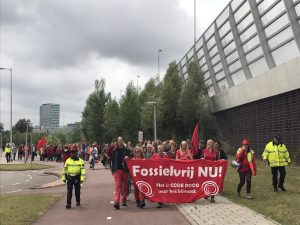 1:50 PM:
Nuon’s coal power plant at Hemweg was supposed to be closed for reparation until Saturday. Today, Sunday it’s still closed. Would that have anything to do with unwanted visitors?
1:30 PM:
There is more police by the fence where the participants of Code Rood have entered the grounds of the Coal Transport Bulk Terminal Amsterdam (OBA). The media bus has been sent away.
There is a peaceful atmosphere on the grounds of the OBA. More cranes and towers are occupied by participants. Some participants are playing frisbee. The participants’ white suits with red stripes – a sign that we are drawing a red line against climate destruction – are in stark contrast against the black mountains of coal.
A fox has been signed walking on the coal grounds.
11.30 A.M:
A police bus has arrived by the media bus, which is parked along the road of the Coal Transport Terminal Amsterdam (OBA). They wanted to know if the participants on the terrain have been advised about their safety. We have assured the police that last night a long briefing has been done with participants about safety, in three languages.
The police have told us they are not planning to enter the terrain. They are concerned about the participants’ safety.
10.30 A.M: 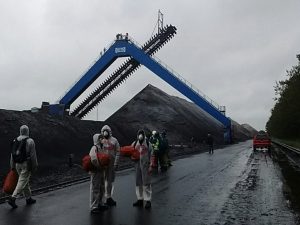 At least 4 cranes have been reached by the group. “We are everywhere”, says Kira, one of the participants. Even under the cranes you can see people chanting: “Climate justice. Now!”
“We are here in the middle of Mordor”, says Kira about the view from one of the cranes. There are mountains of coal everywhere. There are only a few employees on site at the Coal Transport Terminal Amsterdam (OBA). 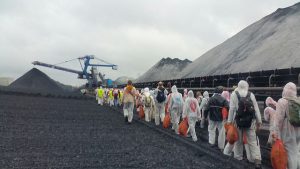 From the Westhavenweg there are Code Red participants and big banners on the top of a conveyor belt.
Police have not arrived yet. The security officers indicated that the operations had been preventively suspended. Nowadays it seems you only need to announce that you want to close the fossil-fuel industry and they close it right away!
10 A.M.:
It’s time! More than fifty participants of Code Red sit on top of a crane of Coal Transport Terminal Amsterdam (OBA). They’re displaying a banner with the text: ‘Robbers’ state is killing the climate.’ They are planning to stay for a while. According to the student Fleur, they even started building a toilet.
Over 350 people were in the area of ​​OBA this morning. ‘Entering the terrain was exciting for me because it was the first time in taking part with an action. But it did happen, we all had to cross a small creek. The guards even helped us,” says Fleur. Once inside, however, the participants were sprayed with water that smelled of mud and manure. 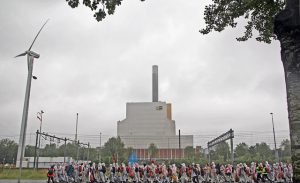 An hour earlier, the participants had left from the camp on the Contactweg wearing white jumpsuits – showing the connection with the Ende Gelände actions in the brown coal mines in Germany. The participants began the walk by taking a lap around the climate camp tents, shouting the slogan: ‘Ready to fight for climate justice. We are a peaceful army. Let’s go!”
Livestream from the crane on Facebook.