Justice for the Ogoni 9 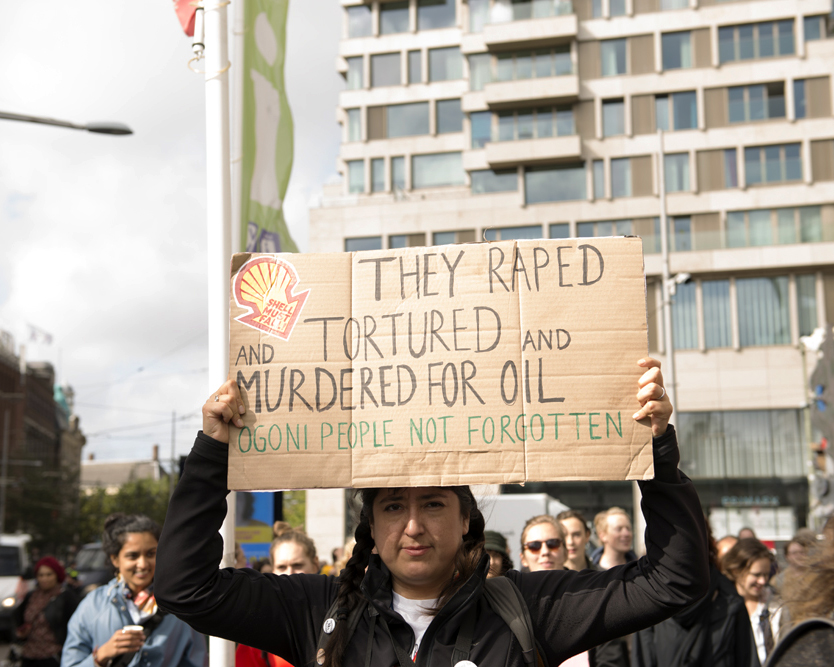 We call upon everyone to join us to remember the Ogoni 9 who were executed on the 10th of November 1995 and to demand accountability from Shell for its complicity in this atrocity!

We will gather at 11.00 a.m at the Koekamp in The Hague ( https://goo.gl/maps/25SNey84davdSsoG8 ). We will give a short briefing and walk from there to the location where we will honour and remember the Ogoni 9 and the hundred-thousands of Ogoni people suffering from Shell’s oil extraction.

Dresscode: We ask everybody to dress in black; formal clothes are preferred.

The story of the Ogoni 9:

Shell has been waging a lethal ecological war in Ogoni land since 1958 when it first discovered oil reserves in the area. The oil exploitation has been concentrated in the coastal plains terraces to the north of the Niger delta, which is home to the Ogoni people, an ethnic group numbering 500,000 people.

More than 900 million barrels of oil of estimated value 30 billion US dollars have been mined from the area since the discovery of the oil reserves. 96 oil wells connected five oilfields which were mostly operated by Shell and where gas has been flared twenty-four hours a day for more than thirty-five years. Between 1976 and 1991, over two million barrels of oil polluted Ogoniland in 2,976 separate oil spills.

In 1990 the Ogoni began to powerfully resist the destructive intervention of the oil industry and the Nigerian dictatorship in their home, where despite of the stupendous oil and gas wealth of their land, they were confronted with environmental degradation, political marginalization, economic strangulations particularly marked by an unemployment rate of over 70 percent, slavery and possible extinction. What became known to as the Movement for the Survival of the Ogoni People (MOSOP), with Ken Saro Wiwa as its leader, issued the Ogoni Bill of Rights (OBR) in which they demanded (a) the right to self-determination as a distinct people in the Nigerian Federation; (b) adequate representation as of right in all Nigerian national institutions; (c) the right to use a fair proportion of the economic resources of their land for their development and (d) the right to control their environment. This was followed by a massive peaceful protest in which 300,000 Ogoni men, women and children marched against Shell’s ecological war and the Nigerian government’s denial to the Ogoni of all rights in January 1993.

More than 24 years have passed since then but despite international protests, no justice has been served to the Ogoni people as they continue to live in a state of crisis! While oil production has ceased, pipelines operated by Shell still traverse the land, creeks and waterways. Leakages – caused by corroded pipelines as well as bandits – mean that the area is still plagued by oil spills to this date. The Nigerian Government officially launched a clean-up programme in Ogoniland three years ago; however, communities are still waiting for emergency measures to be taken and clean-up to begin.

While Shell admitted that its oil operations have polluted large areas of the Niger Delta it resists charges of complicity in human rights abuses. However, confidential memos, faxes, witness statements and other documents released in 2009, clearly show the company regularly paid the military to stop the peaceful protest movement MOSOP against the pollution, even helping to plan raids on villages suspected of opposing the company. Moreover, Shell continues to undermine democracy and feed into corruption in the country by engaging in rigged trade deals with the government that serve business’ interests rather than the welfare of the people #OPL245.

This year, 4 widows of the Ogoni 9 were finally able to bring Shell to court for its role in the murders. We stand in solidarity and support Esther Kiobel’s demands who fought for over 20 years to bring Shell to court in order to serve justice to her murdered husband Barinem Kiobel and the other Ogoni 9. We demand that Shell is brought to justice and pays reparations for the damages done, including cleaning up the mess that has been left in the Ogoni land. But more than reparations we demand that such an atrocity will never happen again!

They tortured and murdered for oil
Ogoni People not Forgotten
Shell Must Fall!